Welcome to the season of Taurus — highlighted by two meteor showers and a spacecraft’s destination that have me thinking about discovery and the sometimes vast gulf of time between predictions and observations.

Sun enters Taurus
The space probe Pioneer 10, launched in March of 1972, is headed now in its retirement toward Taurus — falling through the cosmos on a journey of thousands of years before it reaches the neighborhood of stars in this stubborn constellation.

Pioneer 10 carries a golden, intergalactic postcard with a return address to the Earth, designed by Carl Sagan. I like to imagine a Taurean consciousness attempting to translate the scientific symbols.  What sign does Earth sit within from their perspective? Perhaps Scorpio, or perhaps something we can’t quite yet translate.

The return address is based on the nearest pulsars to Earth, a sign all its own: 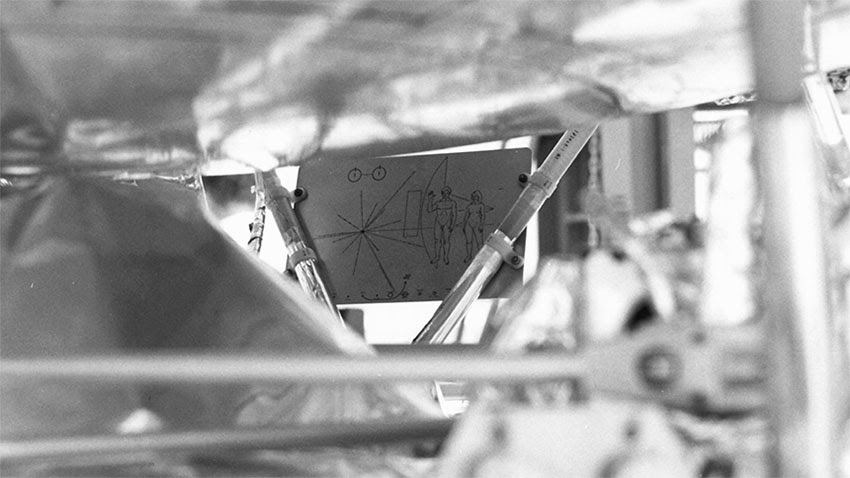 Lyrids Meteor Shower
Records of the raining embers of the Lyrids begin over 2,700 years ago, first reported in Ancient China. Tonight, and into the dawn morning, they will peak once again as our earthly path encounters the orbital dust trail of the Thatcher Comet. With an orbital period of 415 years, the comet was only first seen in 1861. What a gap between observation and the discovery of its cause!

The shower’s radiant point rises between 9-10pm local time, but the moon will be chasing it as well later into the early dawn hours. Worth looking earlier in the night, or finding shade from the moon in those midnight hours to let the eyes adjust.

New Moon in Taurus
A new start, and a clear night sky for the Eta Aquarids in the next few days. Amongst its missions of discovery, Pioneer 10 studied Zodiacal Light, a phenomenon of sunlight reflecting off of cosmic dust within the interior of the solar system along the plane of the Zodiac. In the spring on a moonless night, look west-southwest 90 minutes after sundown for a Milky Way-like glow at the end of evening twilight, which leads the phenomenon to be referred to as a “False Dawn.”

Mercury Enters Taurus
Stubborn communication, or thoughtful contemplation? What is worth discovering that is outside of ourselves, beyond our timeline?

Eta Aquarids Meteor Shower
One of two intersections with the long entrails of Halley’s Comet, whose namesake predicted its return through examining historical records (the Big Data of the Renaissance, in 1705) but did not himself live to see its first predicted return. But perhaps he did witness some of its longer, bi-annual reminders.

Mars Enters Cancer
Steadiness, patience, and incremental improvements are a compounding effect. What is one thing you can do today to support making a small shift? Mars moves to Leo on July 1st, a good point in the future to plan on a check-in. No expectations of results or measurements until then. Give yourself room to make the transit, too.

Venus Enters Taurus
There is a sensual comfort between bodies, within our observations, that bring about transformation. I have long looked at beauty and wanted to look forever. To all witnessing, there is a season — to appreciate what appears and to be changed.

Full Moon in Scorpio
When Pioneer 10 looks back toward its origin (us) from Taurus, it’s looking in this direction, its dish reflects like this big bright dish of the moon, full of sending and receiving. Here’s a strange tale to ponder, about sports and the imagined future lives of the Pioneer crafts, 17776.

Tuesday, May 21st
Mercury Enters Gemini
The first NASA spaceflight program which sent solo American astronauts into space was named after the Roman mythological figure. The second program named its dual-astronaut capsule Project Gemini after the twins of the Zodiac. There are places we can only visit in solitude, and places we can only reach together.

Sun Enters Gemini
Castor and Pollux are the twin figures of Gemini. There is a duality within each of us, and sometimes a missing half that we are searching to discover.